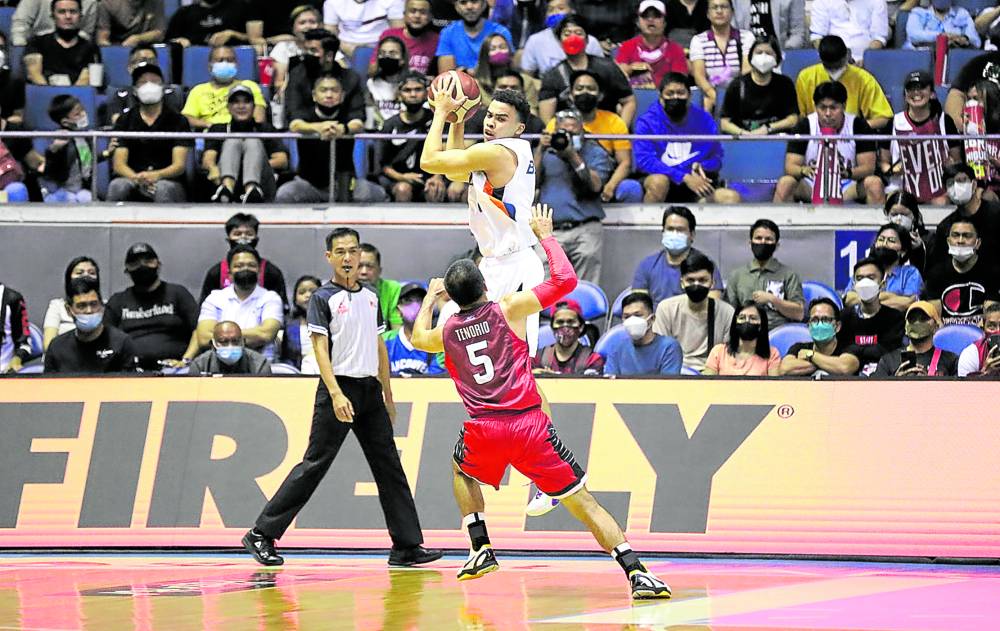 Aaron Black (in white) has come up with a great performance in Game 1. —PBA image

Meralco did a lot by beating Barange Ginebra 104-91 in the opener of the PBA Governors Cup Best-Seven-Seven title series at the Smart Araneta Coliseum on Wednesday.

The Bolts shot with deadly accuracy – a whopping 51.9 percent – while the screen-lifter made the labor of their imaginary enemies for each of them. Their backup crew was also lethal, accounting for 32 points which more than doubled Jean Kings’ reserves that night.

But with the club’s history set against its imaginary foe, Meralco’s spectacular outing felt like a token win.

And perhaps, Meralco coach Norman Black says it best: This franchise has been around for so many days towards the end of this relationship that it doesn’t feel good enough to celebrate a win.

Allen Malksi, whose Bolters took a 53-39 lead in the second quarter, also spoke of the opening victory of the minor crucial series.

“It’s just a game. We haven’t achieved anything, “he told reporters as he exited the Big Dome. “If you look at it, it’s only a quarter.”

The possibility of writing a different ending in this latest installment of Meralco will largely depend on how consistently the Bolts can continue to do these things properly.

And as far as ownership and blackness are concerned, the Bolts are ready to try just that when the series leaves for the Mall of Asia Arena in City for Game 2 at 6pm on Friday.

“We are just focusing on our defense. And then with our crime [will remain about] Making for each other, ”says the experienced forward.

“Everything will be defense for us. It will try to find a way to slow them down aggressively, “said Black.

“Honestly, we were awesome, they were great,” the Geneva team told Inquirer. “They looked ready and inspired, we looked like we were walking in the park. We hope we can turn it around in Game 2. Needless to say, we don’t want to fall into the 2-0 hole.

Barange Genebra, a three-time winner in the last four editions of the tournament, is hopeful it could tie the series.

And just as the Bolts dismissed the win as “just a win”, the Kings also considered the Game 1 push to be “just a defeat.”

“It’s a seven-match series, isn’t it? And that’s the good thing about this final. We know how to beat Meralco. We know that [the Bolts are] Very aggressive, very motivated, but we also know how to beat them, “said LA Tenorio.

“[Coach Tim Cone] Says he doesn’t know our team [that played in Game 1]. And I have to agree with him. ” “Offensively and defensively, we were out of touch. This is not really the Geneva team that played [TNT] And NLX.

According to the veteran playmaker, what will be important now for the crowd’s sweethearts is to match the intensity of Meralco from just the tip-off.

“If we can’t match their strengths, any coordination doesn’t matter,” Tenorio said. “Obviously, [the Bolts] It wanted more. So we have to match that mentality – that’s exactly what we want (this championship). That is a different championship. “

Also keeping the spirit of Geneva alive is the possibility of high-jump forward Japeth Aguilar rejoining the Kings at some point in the series.

Being a mere spectator due to injury, Aguilar thinks he can do it, “Hopefully in a week. I just need to get my rhythm and conditioning back.”